The portion of VRAM which is displayed starts at about column 4, row 4 and expands 102 pixels horizontally and 58 pixels vertically, giving a resolution of 102x58 pixels. This resolution is used in the MESS emulation system. However, most CRT televisions display a smaller resolution horizontally because of overscan, so the safe area to use is about 95x58 pixels. Many TV sets are adjusted wrong so that picture is offset in one or two directions. Zoomed and off center is what to normally expect, more or less. Note that the resolution is a lot closer to widescreen (16:9) than standard definition (4:3). On a TV from the 70's or 80's pixels are rectangular, standing on the short edge. In widescreen mode they are close to perfect squares. 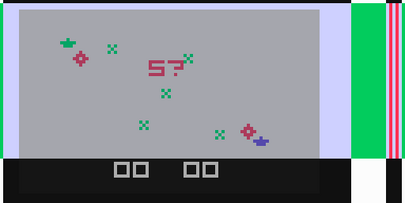