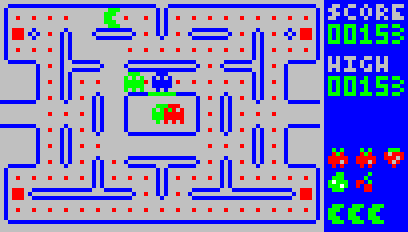 A mockup of the Pac-Man playing field.

This Pac-Man homebrew is being developed by Blackbird. The current plan is to port the original Arcade game to the Channel F as closely as possible, with several easter-egg added in. The current goal is to have the game fit into 2k, and use no external RAM, but the specs will be updated as time goes on.

Feel free to visit the talk page to comment on or help improve the game.

August 14, 2007: Pac-man has been almost ready for a long time now at build 28, it has almost all the features of the real thing except for a few details. Monsters don't run away when they turn blue, monsters don't slow down in the tunnel and there's also no sliding through the tunnel, object simply disappear and reappear at the other side. There is also no speed increase and no continous soundeffects while playing except for a few clicks when eating and beeps when monsters are eatable. Oh - and there are no intermezzos... Other than that, I think we've managed to sqeeze everything in, even a nice intro.